Auctioning Beautiful Historical Bassoons – Ross/Scherer Baroque Bassoon A=415, (made in 2012) – Glier in Klingenthal,Sachsen (original ca. early 1800’s?) – Anonymous German (or Viennese) Bassoon (maybe 1840, Dresden or Leipzig according to Robin Howell)
My auction of my original art, instruments and antiques ends tonight at 7:30 pm, eastern standard time.
I’ve been cheerfully blogging about my art.
But it’s harder to write about the bassoons.  So I am just going to ramble and post this blurt in the last hours of the auction.  If you are the least bit interested in them, you might enjoy reading this.
It’s  my ardent wish is that a real performer gets these precious instruments, either a seasoned player or an eager young student or professional who loves, as I did, the idea of touching the past through these instruments.
They are all real bassoons, meant to perform… the Ross Scherer is one of the best baroque bassoons on the market with a particularly warm and deep tone, was made in 2012, has a new Kim Walker gig bag. It has character and is a bit more of a handful than the Wolf HKICW that all the kids are playing (I had one of those and it was so easy to play, but a little bland) but worth the effort.  This bassoon is worth $5000US and it looks like it’s going to sell for much less on the auction… any price that is close to this or equal is worth every penny.
The old bassoons are another story…full of history that an expert could guess and that the rest of us can only imagine. I do not possess any academic expertise in their origins, just enjoyed speculating with the experts who restored them.
They each were played for a lifetime by their original owners, and maybe others in the ca. two hundred years that they have been around, the wood burnished and the finger holes curved inwards with the wear of decades of performing.  But they are not worn out, and bassoon-maker Leslie Ross took a a couple of months to both restore them and to measure them in great detail, producing drawings that will allow her (I think) to make bassoons that are similar.
The Anonymous bassoon, with the capital “F” carefully carved into the inner curve of the wings reminds me of a Heckel… it feels like it was really played and it springs to life more quickly than the older (I think) Glier.  I experimented with different Leslie Ross bocals (the original bocal got misplaced when I loaned this bassoon to a dear colleague in Europe who died in a tragic paragliding accident). I also have the original simple wooden box that this bassoon came in and am keeping it.  The delicate ivory bell ring has been carefully repaired more than once, and present, one small chunk has dropped out again and is carefully wrapped and in the case… a fine bassoon repair person will use the right materials (not modern glue) to repair. The bell itself has a slight curve. Robin Howell spent many hours restoring this bassoon and removed/filled some keys that he thought were not original, then in 2011, I had Leslie Ross give it a linseed oil bath and restore all the keywork and more.  Pitch is lower than A=440 and higher than A=430…. It really depends on bocal/reed choice so I think you could probably get it to produce either.  Not sure because I never got to play it in orchestra, only duets.  This bassoon has a hard sided old gig bag that is pretty good.
The Glier in Klingenthal, Sachsen was found in an antique shop in Toronto by my former stage partner, Guy Few… we were looking for furniture in one of the big stores that reclaims parts of old buildings (Smash) when Guy spotted this bassoon.
The owners had dragged it around for 12 years, fully assembled, minus bocal, before someone told them what it was.  I was so overjoyed to see this venerable, delicate beautiful bassoon.  It was very grimy, but we could see and feel the natural rings of the maple… all this became much more visible after Leslie Ross restored and totally cleaned the bassoon. Once she finished the work, we could also see the maker’s stamp clearly on each joint. Very exciting. It has an extendable wing, I assume to allow for different pitches, and the high a and c keys also extend… it is mindblowing to me.  The low C hole is delicately outlined with ivory…. the bass joint is extra long and the bell is very short… Leslie gave me all the string and bits that she removed and replaced and I’ve got these relics in a box that I can send too. This bassoon needs much more playing to fully reveal it’s potential.
I don’t have a hard case for this bassoon because of it’s non-standard dimensions, but I have invented a gig bag out of a case cover. And there are Leslie Ross bocals with this bassoon.

The bonnets that protect the low D keys on each of the original bassoons are also very lovely (see below)
These instruments deserve to be owned  and played by someone who is a position to show them to the world, share them with other players and students… someone with a good university job, or simply the means to take care of them.  I got them started with thousands of dollars of restoration.
Write to me if you have any questions.  Make a bid on history. 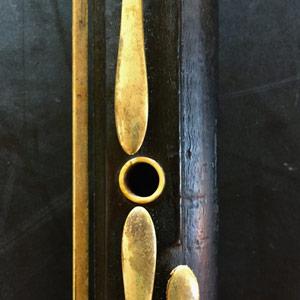