I’ve re-printed the essential Bassoon Out Loud bumper stickers… if you don’t have one yet, now’s the time. There is a laminated one that is really good for real bumpers, and a normal sticker that is for indoors (though mine lasted forever on my bumper).

Life in Music: the company we keep (colleagues)

I am grateful and amazed to the point of being stunned.  Stunned in the sense of standing motionless, jaw slightly agape, mind racing, body frozen.  No actual injury; quite the contrary.

This month, I have played with some new people and have felt new fires rising… rehearsing this week with the violist David Rose for our recital on December 9…. all who know David know what a supremely gentle and intelligent soul he is.  Those who have played with him know how skilled he is.  And what fire and strength lies in this refined and thoughtful person!  To play with him, I feel how amazingly quickly he learns… each repeat of our fiendishly challenging new work by Gernot Wolfgang is better… if I fumble and stumble, David is momentarily confused by my opacity but never loses his pulse.  Each great player that I work with has some distinct trait beyond the universal markers of beautiful tone, tuning and sensitivity.  Sometimes it is hard to name because I am experiencing these traits for the first time.  But it is amazing to experience.

In October, I got to improvise with the folk guitarist Valdy.  We had just finished eating Jamaican curried goat for breakfast and were waiting for other musicians to arrive for a classical rehearsal at my house.  Valdy looked at me with those impossibly blue eyes and asked, “Do you improvise?”  To which I replied, “Not publicly”  For me, it is right up there with dancing, which I do by myself in my house.  He kept looking at me.  “I’ve talked about it for decades and I really want to.”  “Get out your axe,” said Valdy (he probably said “bassoon” but he is super cool and I remember it as “axe”)  So I whipped out my horn and a responsive reed, and jumped in.  He asked if G were a good key, which it truly is, allowing me to play my favourite high notes and still be in an open key.  So I played and he supported and I had the sensation of improvising.  I know that he was supporting me 101%, finding logic in my gestures, providing harmony on the spot.  Then he changed styles and I stiffly followed, slowly gaining confidence.  It was wonderful!  And I know more than ever that I want to do this, to both support and lead, and that I will need to do more.

Earlier in the fall, I joined Valdy at an event… he did a scheduled encore and brought me on stage with him.  The night before, he wrote out some lovely harmonies for Quand au Soliel, and we played together.  What a beautiful musician, one who connects and surfs on the harmonies.

I will tell you later about playing with bassoonists Lee Goodhew Romm and Laura Koepke… the generosity, eagerness and groove of these two colleagues.  And I will tell you about soloing with group of twenty-seven and Orchestra London and the joy of playing on stage beside extraordinary conductors (Eric Paetkau and Alain Trudel), in front of orchestras that are giving everything their all to allow the new music to live.  And of working with composers who are searching for solutions while stretching the voice of the bassoon.  The incredible generosity of all these musicians.

I have to go practise now. 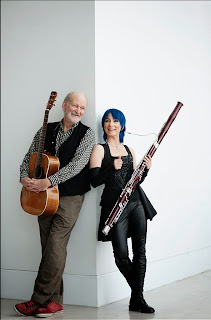 I can’t even spell it.

Glenn Buhr’s ‘man will only grieve if he believes the sun stands still‘ is the nominated contemporary work.  This piece is based on the poetry of Margaret Sweatman and you can hear her singing them on her album Phenomenological Love Songs.

Our US label (we don’t have a Canadian label… none of them wanted us!) tells us that the lists will go up in about a month and then the members of NARAS (National Academy of Recording Arts and Sciences) will vote, short-listing 5 candidates in each category.

Winners will be announced sometime in February, 2014.

← Mirror or Light - What Kind of Musician Are You? Notes from Abroad →

One of the best emails ever…   We just received news that the Ontario Arts Council is funding most of the commission of the new bassoon concerto by superstar composer Paul Frehner!  The concerto will be premiered in 2013/14 and I will announce the orchestra once I have permission from all contracted parties.  So flipping happy/grateful/selfpinching.
← Play Every Day! - practising on the road (or anywhere that they will let you) Gananoque Concert! →

Part of me wants to wait for a quiet moment to write my thoughts in a cogent and useful manner, then the other part of me remembers that nothing will get written if I think this way.  Life is layered, with one unfinished project overlapping the next, and there is nothing tidy about an intensely creative life.  And a creative life can be kind of boring in the telling if not the living….

Tomorrow, Monday, July 16 will be the rehearsals for our Canadian Concerto project, Part One.

Today was spent by both me and Guy in working out our new solos in Michael Occhpinti’s new work, commissioned by us, for trumpet, bassoon, electric guitar, percussion and string orchestra.  We wanted something that could fit on on a pops programme and give a hint of the dynamic, propulsive jazz lyricism that Michael is so good at.  As part of the preparation for future performances as well as to give me a glimmer of insight into the process of writing, I have taken some lessons with the jazz bassist Daniel Fortin and I will continue learning about improvisation.  It is something that I have always wanted to do, and now we have a concerto that allows for this.  In the meantime, Michael has written some wonderfully challenging solos for trumpet and bassoon and will fill in with a lot of his own improvising.

Our second disc will be recorded in November, 2013 — a new concerto by Paul Frehner and 2 works by Alain Trudel, including the beautiful Carnets de Voyages that was also a CBC commission for trumpet, bassoon, percussion and string orchestra.

Stay tuned and I will let you know how it all shakes down.

Life is hurtling by — played a coupla times with the Toronto Symphony (massive Mahler 8 etc) and had the joy of being on the same stage as hundreds of great musicians including my young son and my ex (contra).

Went to New York and brought home my newest baroque bassoon, a lovely, tenor-voiced Scherer by the extremely gifted Leslie Ross.   In addition to my gorgeous new horn, Leslie gave me a disc of her recent compositions and performances with computer interactive bassoon… she is a superior being.

Guy and I are powering up for our next recital at the incredible, hothouse venue, Oregon Bach Festival.  I am so excited I could lie on the floor and do the chicken dance but don’t know how.  I mean, this festival hosts great musicians from across the world and is the dream cross-over environment (cross-over, to me, means baroque music played on modern instruments).  We also get to present our kids show, Buzz and Crow (here is a link to photos from our last show)

Concerts and projects are filling in for next season… so excited to be playing concerti with my long-ago hometown orchestra, the Prince George Symphony with their exciting new chef d’orchestre, Kevin Zakresky.   This is my first time back in all these years!!  Playing Hummel and Vivaldi C minor and officially releasing the new Vivaldi disc.  In other concerto news, GF and I will be playing with the Okanagan Symphony in 2023/14 season and I will be doing one of my Vivaldi concerti on baroque bassoon (will announce in fall).

This July, I will be recording a concerto by Mathieu Lussier along with 2 solo works for trumpet (or corno) and bassoon with g27 and Eric Paetkau leading the orchestra.  Guy will be recording his Lussier concerto and is working on his strato-high range.  We will record the last work for that disc later with Alain Trudel (composer/conductor) but it is absolute secretarial hell to find two days that work for the conductor, composer, orchestra, engineer & soloists.  We need a manager.  We have a manager, but we need a manager who helps us with this endless scheduling.  Or not.  I dunno.  Anyway, this disc is all-Canadian music with roots in sultry music of the middle east, Sicily and other far-flung sonic locales, hence our latest album title Exotica.

And I have joined forces with Kristin Wolfe Jensen to update the Royal Conservatory Syllabus for bassoon… we are adding all the missing grades, starting from preparatory level to ARCT (Associate of the Royal Conservatory Toronto… at least, we think that is what the acronym stands for).  Kristin is bringing so much to the project in terms of advance preparation and connections that I grin with utter, unalloyed relief.  I have ideas but she has structure + ideas.

Norbert Palej has invited me, Guy and Beverly Johnson to perform a new work written by him (for us) at the U of T Cage Festival on October 25.

I will be playing again with Violons du Roy in the new season (missed playing with them soooo much this year) and playing/recording with Aradia again.   Guy and I will be criss-crossing the country, first to play at Prairie Debut in October then going to the east coast for concerts in March with fall/winter shows in Ontario… a quieter year for the duo except for all the recording.  I am still working out my Vivaldi tour, putting together different musicians to make a moveable band that might be a bit different from the usual… I so hope that I can pull this dream together.

OK, gotta hit the road now, get home in time to practise.  Driving a lot to look in on my brave old Dad these days.