Days in the Life of a Bassoon Soloist

Each day is filled from the front to the back with students, reeds, musical ambition, practise, planning, rehearsing and sometimes with concerts.  The concerts are the pearls that link every endeavour.
I get up early and made reeds, and sometimes manage to practise a bit before my first students arrive.  I look forward to seeing them and get motivated in the course of answering their questions; even when I make demands of them, I secretly wish I could immediately practise on my own to see if I can fulfill those same demands!   There is hardly time to prepare each task yet I lunge eagerly from one to the next, each moment feeling quite certain that I have forgotten something.
On Saturday, one of my lovely former students has flown from Newfoundland for some reed lessons and I showed her how I handshape (no shaper, just a sharp craft knife) and handprofile (no profiler, just a sharp reed knife, files, sandpaper and easel).  The time flew by.  So incredibly wonderful to be working side-by-side with a young artist who is really beginning to find her way yet still knows what she wants to learn.
Last Sunday, a “day off” was wonderful .. started with a rehearsal for the showcase with Guy Few that we will perform next week… then 12 students started arriving for our day of working on reeds.  I showed all of them (ages 16 -23) how to shape and profile using only knives, files, sandpaper and easel.
I think back to my years as a student… 2 years at the University of British Columbia followed by 4 years at the Curtis Institute of Music (Philadelphia).  Each day was filled from front to back with learning to make reeds, learning music.   And boys.
Later, when I joined the Montreal Symphony, my days were filled with rehearsals, recordings, practising.  And boys (Quebec boys).  I came home to Pender Island. B.C. at the end of the summer seasons, exhausted by the year’s work, new as I was to the  confining rigours of playing in a large orchestra.  All I wanted to do, really, was make reeds and practise material that I wanted to get to during the year but never could.  Once my youngest cousin came to visit.  Four years old, he wanted to play.  I could hear him outside my room where I was practising.  He asked his mother… “when will she be finished?” and his mother said, “she will never be finished.”
I am still recording, rehearsing, practising & performing but with very different results.  And I am still surrounded by boys, but now they are my young colleagues.  Quite different.  And there are lots of girl colleagues too.
This week started with a 12 hour day of teaching and each student came in brandishing a new discovery… Sheba had a list of promotional ideas and a clear recital development plan and a list of things that she had learned from her masters’ recital…. Betsy had done every exercise that I had assigned her, even the really boring ones, and has thus jumped into a category of her own… Kevin brought in an exquisitely shaped piece of cane in the Thunemann style (or as near as we can figure based on copying examples) and updates on his Spanish concerto/recital ideas… Christopher brought in a book a Vivaldi arias that he is integrating into a vocal-based recital programme (bassoon as singer)… Neil brought in a newly-made reed, all handshaped/profiled and based on a Reigher shape that he had discovered, along with ideas/questions about interior gouge/relationship to bark.  I snatched the reed from him, once we had trimmed it a bit more, and discovered a dimension to the response that I have been searching for in my own reeds. After meeting my son and getting him home and preparing my teaching materials, I return to the University to lead the Double Reed Class.  We did solos and ensembles and I introduced them to circular breathing… such a pleasure to see their sweet perfect faces taking on all kinds of shapes as they dived into this!  And some of them figured it out, or rather, just started doing it without really knowing how they put it together.  After this class, I met with a dozen bassoonists from both U of T and the Glenn Gould School to discuss the plans for our annual Vivaldi Christmas Concert. 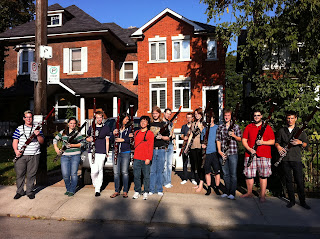 Then I went home and cleaned up and practised for an hour… my days stretch from 6:30 a.m. until 1:00 a.m. and they still are not long enough for all that I want to do.
http://www.youtube.com/user/nadiva?feature=mhee#p/f/1/yuZY3WALCc4