Guy Few and I were thrilled to return to the Firehall Theatre and the Gananoque Concert Association, one of Canada’s long-standing small concert societies.

We first played an evening concert in 2010 in our early years as a touring duo.  The presenters welcomed us and put us up in the comfortable bed and breakfast that was run by a board member.

The town of Gananoque is a three hour drive from Toronto.  The night before, we had all of our music and instruments packed, and I did the inventory sheets for CDs and also set up the tickets for the raffle (prize was all three of our current duo CDs plus the new concerto one that is about to be released).

We loaded the truck and Guy shoveled snow and we left at 9 a.m. for a 2:00 concert.  When we hit a patch of ice just as we were leaving the city, traffic slowed to a slowly pirouetting crawl and I secretly wished we had left an hour sooner.  The gleaming black ice disappeared after a mile and we were lucky not to have been one of the several cars that were unable to resist the combination of momentum and complete absence of traction.

Spectacular, cold, sunny blue sky against white snow, driving with the sun behind us, perfect!  We arrived in Gananoque at 12:30, Guy telling me not to slow down to stare at the lovely historical houses.  One of our FaceBook friends texted us, saying that we should check out the Socialist Pig for coffee and food so we hoped that we could get there after the show.

We were met at the Firehall Theatre by the president of the Gananoque Concert Association, Ric Austin, and then carried in our gear and set up the CD table with the help of volunteers (Julia and Doug), met our lovely page turner (Robyn) and our mc for the afternoon (alas, name slips mind) and got ourselves into our stage clothes.  My dressing room still had the word “Chief” painted on the glass, a souvenir from the days when the building really was the firehall!  I did quick adjustments to my make-up and reed, Guy rapidly warming up on piano, trumpet and corno and then we danced a bit backstage, trying to actually get warm (biting cold was sneaking in the back of the hall) before we were introduced and the show started.

We loved that it was set up in cabaret style with many tables and people seemed very comfortable.  There was a lighting technician who followed the mood of our pieces and did some very lovely natural effects as Guy walked through the crowd during Harry Simeone’s Trumpet In The Night.  The theatre is slightly dry but the sound is good.

There were old friends in the audience, people who had heard us 3 years ago, along with a bassoon colleague from Kingston (Katie Legere) and many young people, two of whom were from the local repertory theatre and sat in the front row (Haley and Nesse, with us in the photo below).  They ACTUALLY said we were cool!  They liked my dress and hair and Haley said that she no longer thought classical music was boring and Nesse said that she always knew it wasn’t boring.  So great to have the energy of amazing young people in our orbit!

We played our Carnets de Voyages program (see below), different each time we play it, with classical and new art pieces mixed with our stories, and were received with incredible enthusiasm… people have not trouble understanding this music! The second half opened with what we call the Violent Tango, in which we get to channel any annoyance we may have with one another, and the audience responded with just the right kind of laugh.  Then we had the draw for the raffle prize and amazingly, our page turner (Robyn) won!  So I also drew for a second prize (my new Vivaldi disc and Joan won.

After the show, we chatted a bit, then slipped out of our fancy clothes, winged our stuff in the truck and raced down to the Socialist Pig… they had been contacted by the good people of the Gananoque Concert Association and Shannon held off closing until we arrived!  The building is part of a wonderful historical renovation by Axelworks, transforming the old stone spring and axel factory into ultra-mod stores with some very funky design elements… we want to come again just to browse and have brunch in the attractive rooms!

We drove home in the jeweled light of the splendid day, the sky glowing pink, then purple before night fell and we were home.

Guy and I love playing in the small towns of Canada and we are so glad that we get to come “home” to many different places.  A rare treat to be close enough to home to drive our own truck and sleep in our own beds while meeting all kinds of vivid people who are so open to what we are doing.  I was wistful leaving this time, and Guy said, as he did 3 years ago, that I am not allowed to live here…ok,  but what a great site for a classical summer festival…

Thanks for a wonderful day, Gananoque!  We’ll be back and we’ll bring our friends. 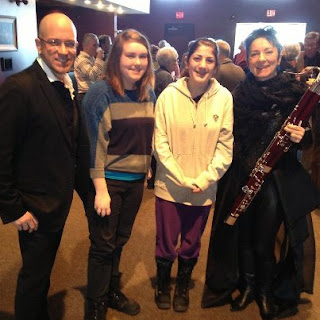 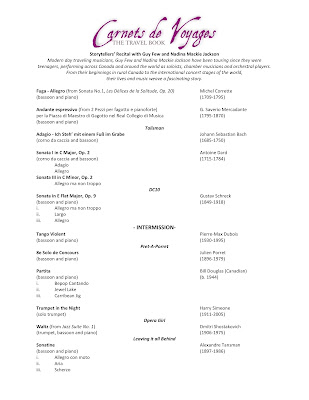