I haven’t written since our return from Japan.  Using the unusual gift of some free time to finally organize my office.  And to woodshed the Berio Sequenza XII, coming up soon.  And visiting with Nic McGegan, here to conduct 5 concerts of Messiah with the Toronto Symphony.  And trying to make a nod towards Christmas…

Almost a week has passed since our return and I am left with an amazing sense of gratitude from the time in Japan… even including the plane ride home. I sat with a young American who was returning home via Tokyo after her first year of teaching English in Korea.  My armchair receptacle for my headset was not accepting the plug in… I despaired, thinking of the 12 hour plane ride and my thwarted plan to indulge in as many movies as possible.  She calmly suggested that it might work anyway.  When I checked, it did!  So I held it in place, then half an hour later, asked the steward for an elastic band.  While he hesitated (why did I think he would have one??) my seat mate whipped off one of her hair elastics and handed it to me.  I put it around the armrest, and the sideways pressure pushed the plug into contact, relieving me of the duty of holding it in place.  The easy generosity of my seat mate, from her basic pragmatic optimism to her responsiveness, extended the sensation of grace that lingers from my time in Japan.

My Dad was very very very tired on the return trip and only rose from his seat once.  The effort was so great for him that I spent the rest of the trip hopping over him by stepping on the armrests… he didn’t mind.  Watching him struggle, his unresponsive legs so heavy, his limbs so tired, but never giving up, made me realize anew how deeply he needed to make this trip.  If he only did what was easy for him, he would not have gone.  But his heart called to these people and they responded.  Dai told me that they did not spread the word of Dad’s visit too much because  many more people would have come and the event would have been unmanageable given our last-minute preparations.  Yet it all felt like it had been planned for months and that it went off without a hitch.  Our Japanese friends have all written to ask after Dad… he went back up north the day after our return, eager to be back in his own house but, as always, missing me and his friends.  He calls to thank me for the journey when it was he who made it possible… his grace is beyond conscious thought.

To be around people who have allowed themselves to be inspired by my father was a privilege that goes beyond words.  He never accepts personal credit for the work and motivation of others, but he feels so happy in the company of those who have worked side-by-side with him.  It will take me years to understand more, but I feel there is a chance.  For now, I know that I want to return to Japan to experience more of this incredible culture and to see my new friends again. 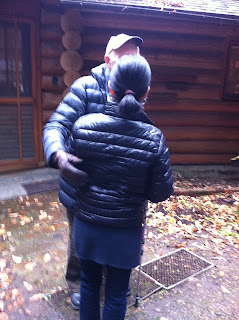 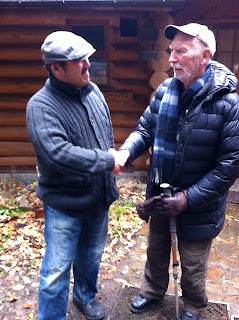 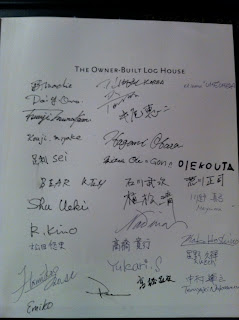