Rainy morning… still going to go for a run.  I only had to get up once last night to help keep the fire blazing.  As always, my upstairs room is so hot that I am not in any need of extra heat, but must keep in mind that Dad feels the cold so strongly.  It is so hard because he cannot move quickly at all which is the one thing that would keep him warm!

Today many more people arrived to see Dad. Toward the end of the day, a local artist (Fukami-san) arrived to show Dad a special door that had been commissioned by the mayor of the  Tochigi prefecture. 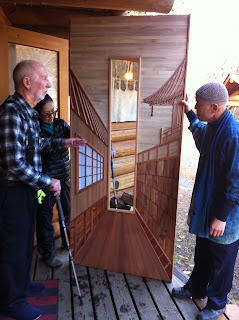 The day’s loose plan involved first going en masse to visit the gravesite of Kyu Hoshino, the founder of the log building school in Japan (Forest Engineers), to be followed by an enormous barbecue  He was one of Dad’s closest friends and an incredibly fun-loving, social person.  Everyone said that he would be glad to have so many visitors.  We all walked down the hillside, past the former home of the Hoshino family (over 350 years) to the family graveyard.  All of the homes in this part of the country have their ancestral graveyards, incredibly beautiful tall dark grey stone monuments covered with different colours of lichen and moss, surrounded by stone gates.  The Hoshino site was beside the river.  Dad was driven down in a van and helped up the steep stairs.  A chair was brought for him but he declined it. 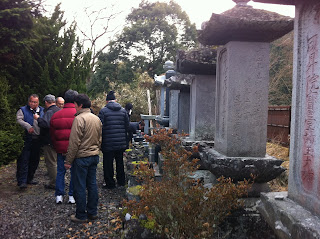 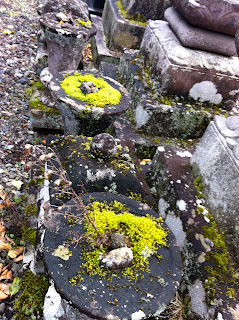 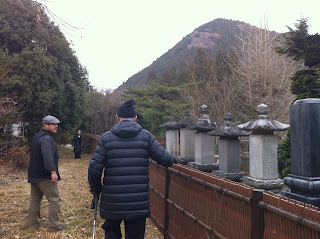 Unlike the church ceremonies of my experience, this was a group of laughing, talking people.  There was some wild animal poop on the grass nearby and it was quickly covered with newspaper and joked about but nothing took away from the sense of ceremony.  Incense was lit by Kyu’s widow Kako, and then each person in the group received two sticks.  We lined up and then put the incense on the grave monument in a small box and squatting on our heels, put our hands together in silent communion.  Dad put his walking stick aside to approach the monument though there was no question of him squatting.  Then we all went back up the hill… Dad was led around the far side of the graveyard so as to avoid the slippery descent down the steep stairs. Once he was loaded into the van, Dai Ona jumped on the back bumper and hitched a ride up the hill. 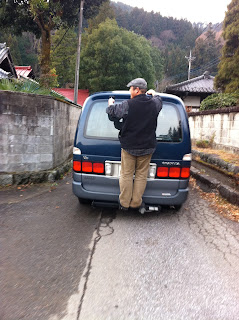 Then the serious business of the barbecue began. As guests arrived, an impressive lineup of fine sakes graced the low wall of the barbecue house. Two woodburning fires surrounded by concrete blocks were set blazing, one of which had a huge flat iron griddle on it.  Another barbecue was set up outside the house.  There was mountains of food, and aside from a few things, very different from a North American barbecue. 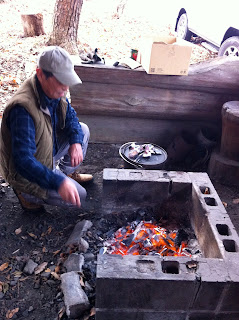 A local writer, craftsman and artist arrived with his wife (Hata-san and Kaori) and created a very rich jambalaya, then grilled thinly sliced cow tongue and shitake.  Kino-san set up the outside barbecue and prised open many huge scallops, shucked them out of their shells, removed the stomachs, then chopped them into quarters and placed them back in the shells to barbecue.  They were big!  I had two of them them, perfectly seasoned with soy sauce and other things I am not sure of, eating them with chopsticks out of the shell.  Shitake were grilled in the fires and on the barbecue… we also had grilled marinated chicken, raw scallops, salami, camembert, noodles with meat and vegetables… altogether a gloriously fine barbecue. 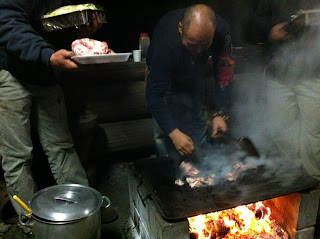 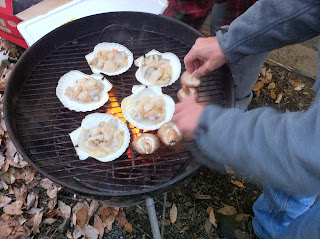 By nightfall, it was a bit nippy and Dad got layered up with two down coats and a fleece to sit on.  Students lined up to have their photos taken with him and photographers from Umenomarutagoya (Dream Log House). 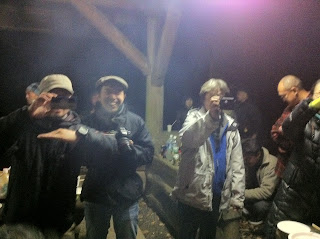 At one point, Dad rose to speak about the importance of keeping the association of log builders alive in Japan… amazing that there is not a log builders’ association here yet!  Many think it is a good idea but no one has stepped forward yet.

One other thing that distinguishes a party of log-builders is the question:  how many fingers do you have?  I must say that I really like these rugged, handsome gentlemen! 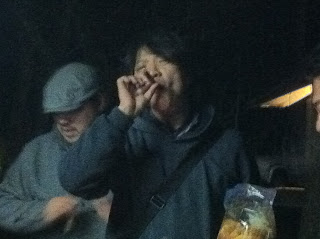 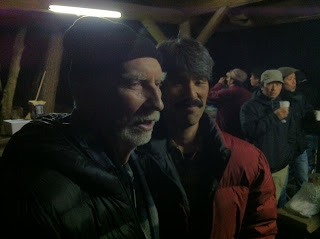 Dad and I went home at about 10:30 and the party continued long into the night.  I was so tired for some reason that I fell asleep fully clothed, waking up later to brush my teeth.

Today dawned fair and sunny, much warmer! I got up and made breakfast for Dad then went for a run.  I expanded my boundaries a bit this time, running past the building site, along the mountain river and up the mountain logging road to the clearing, then back the other way, past the Hoshino homestead and to the bridge over the river. 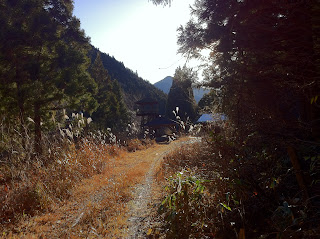 Then went back to see how Dad was doing.  He had a bit of a stomach crisis after the consecutive days of excitement and rich food.  The lesson I take from this is that it is very tough to be old but I try to help.  And I must say that the Japanese are extremely kind and supportive towards older people, so I had lots of back up. 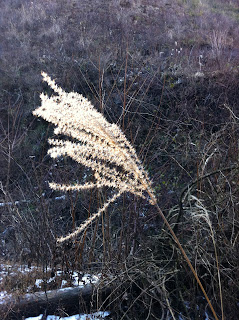 Then Emiko and I jumped into the car and headed back to Imaichi to get supplies.  Every drive here is entertaining as every perspective is utterly new to me.  On the way home to Okorogawa, we stopped to visit the lovely goats (Nana and Ran-maru)… Emiko has told me about them and it was wonderful to see the powerful personalities in these small beasts.  They are the subject of a wonderful series of photos by Kaori… I wish that I could read Japanese as she also attributes comments to them! 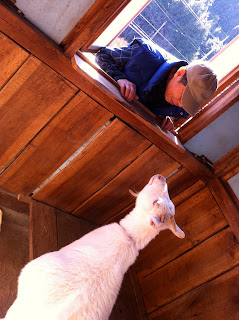 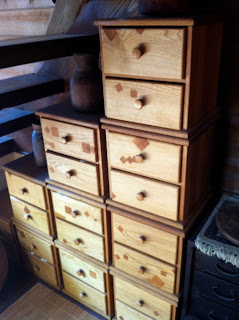 Fascinating to see all the details in the home and in the infrastructure, such as the log garden that sits atop the deck railing! 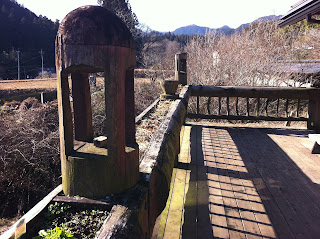