If you have time, more wild west stories from the Mackie family, this time from a letter that Mary Mackie wrote to her beloved parents-in-law. Context: my folks left behind a secure position with the BC Forestry Service and headed to a totally off-the-grid mountain ranch that was about 28 miles from Houston, BC in front of Nadina Mountain, building their own house (first a cottage, then the ranch house), fences etc. Though they had a garden, milk cow and beef, they raised necessary cash for other things with my mother’s freelance writing for the Family Herald (Montreal Gazette), CBC and sportsman magazines. Any technical or adventure articles were signed with my father’s name so that they would sell as women weren’t yet allowed to write on such topics. They started with 34 head of cattle and built to around 120 head before everything blew apart and the next adventure started.

I am lovingly revealed as a bit of a pain-in-the-neck handful in this episode… I was 17 months old and my brother Keith was almost 5 months old. I really don’t know how my parents did it, especially my mother. And the Allan she refers to is my father, and Roy Munger was a senior rancher neighbour, one of many who helped and stood by us. Dick was our English ranch hand.

My mother speaks of a slow healing injury that my father had… this was from his gigantic old Pioneer chainsaw bucking and landing between the toes of his right foot when it hit a knot in a log… this is an amazing story for another time involving a lot of blood and my father trying to drive himself the 78 miles to the nearest hospital. 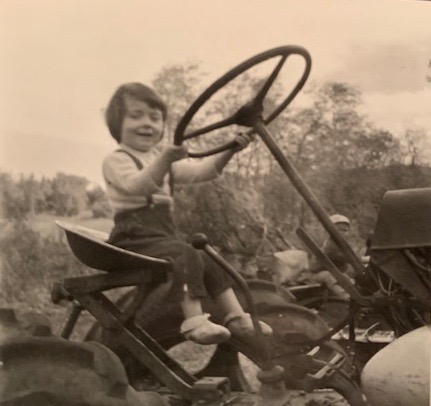 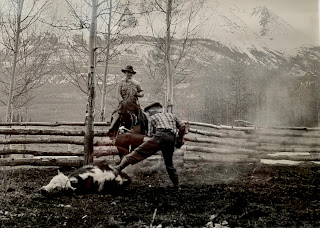 The photo shows Nadina Mountain in the background, with Roy Munger on horseback and my Dad branding a steer with our Diamond/M brand. 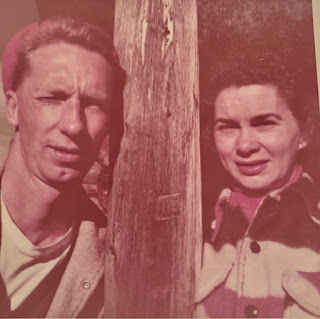 I’ve a feeling that somebody may be going out for the mail soon, so this won’t be too ancient when it’s mailed. This knowledge is based not so much upon intuition or foresight as upon the observation that we have only 1/2 lb. of coffee left.

The mitts came up in most colourful fashion, on a real cattle drive, when Allan brought all our beef home. He gathered up the Owen Lake in 1 day. Dick camped there with them overnight.

Then, next day, they cut our 20-odd head out of the Owen Lake bunch and brought them all the last 12 miles home. Allan had borrowed a buckskin horse for the drive; somebody else had put a fringed, beaded jacket on him to keep out the raw wind; this his weather-worn cowboy hat he was a real picture when he drove the herd in. Especially with old Roy on hand, every inch the cowboy though he approaches the age where he is supposed to sit easier in the rocking chair than in the

Anyway, all the cattle are home now except for the 1 young bull whose presence will not be welcome for another couple of months. All 34 of them are in the yard here. I was afraid to go outdoors the first day. But I find that they are extremely calm creatures and have never seen the slightest orneriness in any of them.

It was real suspense when Allan and Dick when down to the silo, and uncovered the contents. Without a plastic top, about half the silage had spoiled – assisted by a few moose-tracks. Then, more suspense as a load of the good stuff was brought up to the cattle. They didn’t seem to know what to do with it at first. Within a day, however, they all began to bellow and roar as soon as the cat engine started. They started eating about a ton a day, getting fatter before our eyes.

One old cow had her calf a few days ago. We all had to stand guard to keep the others away, even Nadina was there. The calf was born in the heat of the afternoon. He was on his feet at 7 min., he was galloping around his mother by sundown, and the next morning he was playing tag with the other calves. He’s the goofiest calf on the claim. We attribute a lot of this good health and high spirits to the silage. The same cows – i.e. cows that wintered on this same feed – over at Owen Lake, are extremely weak. Some of them could barely get out of the chute after they’d been branded last week.

Anyway… thank you for the mitts! I’m happy to say that the weather has been so hot lately that they’ve not been needed yet. But they will be.

We are so delighted to hear that you have definite plans made to come up this year. I hope you can stay long enough for the kids to really get to know you. We’ve wished so often that they could grow up a little closer to you. At the rate Nadina is coming along lately, she’ll be ready to really soak up a lot of stories and visiting. I hope your shoulder is better by then, as these two don’t know much about sitting quietly.

The other day I was out bonfiring some old willows. Allan brought Nadina out to watch. She studied this tremendous blaze, choked on the smoke, and cried out, “Toast?” She knows such a lot of words and can state her wishes fairly well. She demands from morning till night but if we survive without repressing her too much, she should have terrific drive and spunk. Keith is a marvel. This morning we noticed that Nadina woke up peacefully and did not scream at us to rush in with clean diapers, breakfast, rides, warm-ups in our bed etc. Then we also noticed that she was grinning something fierce – face all screwed up and all her teeth showing. Dawned on us – she was imitating Keith! He’s like an angel in the morning – wakes us with soft cooing and efforts to talk. When we shuffle in to him, he smiles fit to burst, and usually waits cheerfully until his breakfast is ready. We’ve NEVER told Nadina that she had to be like Keith or anybody else except herself – but I guess his behaviour is plain even to another baby.

Recently when Dick and Allan came in for morning coffee, Nadina picked up Dick’s hat where he’d tossed it. She put it on her head, then searched around until she found a long grouse feather, which she clamped between her teeth. Then, hands behind her back, she stomped up and down the room puffing on her pipe doing such a good imitation of him that we were momentarily rendered helpless. I don’t really know what Dick, a middle-aged English bachelor, thinks of all this. Especially when she shrieks, “Hi, Dickeeeeeee?” every time he enters the house.

This fellow has been a terrific help to us. Two men working quite vigorously accomplish as much as 4 men working alone. It is very noticeable, though I think all that we did last year makes progress all that much easier every succeeding year. Dick supplies us with many laughs both consciously and otherwise. He reduced us to hysteria one evening by talking of English fashion in hats, and how he used to like wearing a proper bowler. Like them, that is, until one episode on a London bus when, playing the gentleman, he gave up his seat to a woman passenger. As he was the only person then standing, he went forward to converse with the driver. As they went along the bus hit a tremendous hole in the pavement. Dick rocketed skyward, came in sudden contact with the bus roof, and had his bowler hat hammered down over his eyes. As he fought with one hand to raise it, laughter filled the bus to overflowing and thus they sped merrily through the London night…. Then, UN-consciously, there is his unfortunate speech impediment which causes him, an extremely large and brawny fellow, to turn all his R’s into W’s. It nearly dwives us cwazy at times, twying to keep faces stwaight. It took us days to reach any sensible conclusions following a conversation on Rotary Mower down at Brewer’s.

Allan’s foot has finally healed (touch wood). So many times it seemed all right, and next day it would be open and weeping again. Then a piece of splintered bone came out and it has stayed healed ever since. He had another week’s trouble with his ankle – trying to throw his weight off the ball of the foot caused so much irritation against his boot that an infection started there. He was laid up several days with that. But the past week he’s been fine, thank goodness, and has had the dressings off for the first time in 2 months.

The two of us had a Day Off, just before leaving Paradise Lodge. A neighbour who is extremelygood with kids, stayed the night with Nadina and Keith. We had to get the jeep fixed, buy supplies and whatnot before leaving civilization. We stayed at The Hotel overnight, ate in the dining room,and had what would have been a routine trip to town some years ago, but what we now consider A Time. We visited friends, and also made a tape recording of the script I did for CBC. We both thought the latter turned out very well, so I was terribly disappointed when they labelled it “Not up to broadcast standards” and returned it. So Eileen Laurie will be reading it (next Sept.) on Trans Canada Matinee…meantime I sent it off to BBC. I sent off a set of photos to Alaska Sportsman and they were snapped up like mad. The photographer’s field is a far broader one than the writer’s, I can see that – but their pay is correspondingly lower.

Well, yesterday (Sunday) has evolved into today (Washday) and we’ve had company already this morning amid all the litter of baby bottles and power saws and whatnot. A little Dutch man is preparing to go logging behind our place and he is here with a very polite Young Dutch Man, looking things over. Their manners are a pleasant surprise in this day and age.

I will never have time to write all this down again in my journal, so would you save this from the flames where it probably belongs, and return it with your next letter? It’s a weird plan, but helps me in writing. I whomped up a story in 2 evenings last week from just such oddments – and with Allan’s photographs, have a strong hunch it will bring in another month’s groceries. Oddly enough, it’s the small, tedious details that make the story – if you have only the broad outline and can’t fill in the meat on the bird’s skeleton, you have no story that anybody cares to read.

Now I must get this washload out before it shreds. thanks for your letters…hope you have a splendid tour this summer.

(signature written in pen, using her first name (Mary) with a handwritten postscript)