I have always kept journals.  And I encourage my students to do the same.
And to be truthful, I have many simultaneously-running journals…  a reed-making journal, a student development journal, a health journal for my father, development journals for my son when he was younger, a training journal for me, a project journal for my website and concerts and future projects… you get the idea.
But the main journal is the account of things that happen every day, rather like the impartial eye of the camera, sometimes recording things of note, but mostly capturing the events of the day.  Only later do some of these things take on a shine after the passage of time.
Daily writing also allows me to keep my written script at its current level of florid fabulousness.
But I have gone through some difficult moments with my journals and have backed away from writing for brief periods.  Or worse…
At the age of 22, right when I was starting my busy career with the Montreal Symphony with an impressively relentless schedule that included an intense concert season (150 per year), tours throughout North America, Europe and the Orient and a recording timeline that eventually included 85 projects.  At the same time, I was learning to speak French, developing chamber groups and having a string of gorgeous Québecois boyfriends, all of which I dutifully recounted in my journals.
Suddenly, I was mortified by my confessions.  So in an uncharacteristic fit of prudishness, I took the volumes that I had curated and schlepped from city to city since starting my music studies 6 years earlier at the age of 16, and had my own private book burning.  Except that it was in my rue Hutchison apartment in lower Outremont.  And I used scissors, and really ripped the crap out of the journals.  I have regretted this ever since… I would be soooooo amused to read my accounts of learning to become a bassoonist while navigating boyfriends in two countries and two languages.
So, in this Savonarola-esque moment, I wiped out part of my own history… losing my own account of my teenage years and the beginning of my music studies and career with the Montreal Symphony.  I know that if I had it now, it might help me understand my students better.  And it would be so damn funny, but at the time, I censored myself.
And speaking of censorship, when I was married, my former husband would mutter complaints under his breath about the rasp of my pen on paper as he was trying to drift into sleep, so I would find ways to write earlier in the evening… one of the glories of not being married is that I can scrawl, bleary-eyed and comfortable, anywhere, anytime.  And I do.
But encouragement has always been the stronger force in my life.  My mother loved my writing so much that she would, to my discomfort, ask permission to read my journals; I would have preferred that she surreptitiously read them!
And early on in the internet world, my web designer encouraged me to start a blog, and I loved it! Then, in spring, 2014, I began an extensive western Canadian tour with Guy Few, and had ambitions of writing a comprehensive journal about all of our concerts from northern Manitoba, across the Prairies and finishing in BC over a 6 week period… the tour of a lifetime!  However, my management was concerned about the details that I was offering in the blog, and there were some photos of the many children at our concerts, so they asked me to thoroughly edit the blog… I felt discouraged, but really, I should have shown more spirit!  I should have ignored them and just continued creating my story through the blog.  Instead, I took a loooooooong and unnecessary break from my innocent and inclusive blog.  Live and learn.
Yesterday, I visited an old friend, a former drama professor and one of the early founders of women’s study courses at the University of Guelph.  He was donating a bassoon to my charitable status group, the Council of Canadian Bassoonists, and in the course of chatting, he asked me if I were still writing… I confessed that I had become a bit discouraged, and he said, simply, that I must continue writing.

And oddly, just that simple word of encouragement and support was all I needed to cheerfully return to journal keeping in all of it’s forms.

And I am hugely inspired by Gloria Steinem’s new book, My Life on the Road, where she refers to all the notes she garnered from her travels, not to mention the defining experiences of her whole life.  The stories are valuable, and she created forums for other women too.  More on that later.

I now have so many volumes that they fill out an antique carpet pack that once was loaded onto the backs of camels.  Here I am, sitting comfortably on my complete collection of journals. 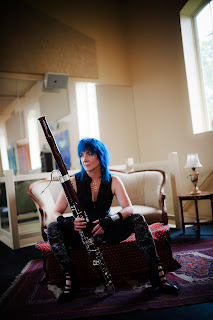