Last Wednesday night, October 11, 2017, I played four new works for bassoon and strings and percussion with my Out of This World Orchestra.   Two of the works were written for me and I am connected to all of the composers.
The intense main concerto, Apollo X, composed by Paul Frehner for me and Orchestra London in 2013, has three movements inspired by various popular songs from the 1960s and 1970s that were, in turn, inspired by the Apollo space program and the race to put a man on the moon. Extended virtuosic passages of rhythmic precision and complexity, contrasted with some harmonics and Berio trills along with mysterious floating textures from the strings and percussion.  It is a very absorbing piece to play and it is surprising and beautiful to hear.
The contrapuntal layering of Patricia Morehead’s Come Dance With Me the Dance of Life was inspired both by the composer’s love of dance and by Nina Corwin’s dark, mad-scene poem, Salome Gives Seven Explanations for a Kiss. With rehearsal, clarity emerged from the complex lines and this piece really grew on me.
These energetic, really new-sounding works contrasted with two short, very lyrical works, which were a new arrangement of BernardGarfield’s Soliloquy… the much-loved brief tone poem originally for piano & bassoon, sounding kind of like an upscale gymnopedie with lots of emotive and harmonic variety in the brief minute that it takes to play, and the premiere of Mathieu Lussier’sfloating, soaring, humane Song of Love and Sorrow, a piece that he created and sent to me the day after my father died in February 2017.
Paul Frehner, composer of Apollo X, also was our conductor and we had two rehearsals for this program.  The first rehearsal was at Bloor Street United Church as it was impossible for me to get rehearsal space at either the University of Toronto or the Royal Conservatory of Music, the two places I teach in Toronto.  I rented the airy, chapel-like room on the top floor of the seen-better-days-grande-dame church, and we hauled up 12 stands and a vibraphone, marimba, 2 triangles: high, slightly lower sistrum, 2 gongs, medium tam tam, medium orchestral bass drum. My former student, Megan Morris, came to help and Paul Frehner also helped carry instruments, saying quietly that only now did he realize fully just how many instruments he had written for! I carried up my bassoon, amplifier, and all the attendant electrical equipment.  The genial caretaker of the church found an extension cord for me.  As this group performs standing, the setup is quite simple.  The first 90 minutes were devoted to Apollo X, then the percussion equipment was packed up, hauled downstairs by more musicians this time, then we had another hour to start sorting out the multi-modal Come Dance With Me.
All of the musicians in our group have busy lives.  I was in the midst of John Williams week with the Toronto Symphony, playing four sold-out shows of all the famous film scores, from Jaws to Harry Potter, Star Wars, Raiders of the Lost Ark and much more… the superb conductor (Steven Reinecke) channelled the energy of the crowds, and the echoes of their cries (over 10,000 people roared their approval of those 4 shows) echoed later in my mind as I poured my energy into presenting new music for bassoon, strings and percussion.  I also thought about it when I had to decline the invitation to play second bassoon in the Harry Potter extravaganza because it conflicted with my self-presented concerto night.
Our second rehearsal was on October 10 and in Heliconian Hall where we would be performing.  Our group is too big to fit on the small stage, so we set it up in the middle of the hall.  I arrived two hours before the rehearsal began so that I could set up stands and meet the delivery company that was bringing the percussion equipment.  Our second rehearsal began to take shape. The string players are excellent and are effective at floating useful ideas; we are all used to working very quickly under less than ideal conditions.
The players are young, resourceful professionals with a ton of energy and focus… Bijan Sepanji, Jennifer Murphy, Jeremy Potts, Sang Kyun(Steve) Koh, Alex McLeod, Laila Zakzook, Brian Lu, Brian Holt, Joe Phillips and Mark Duggan.  All have established their own chamber groups and are intensely aware of the work that goes into self-presented projects.  I can count on them.  Composer and conductor Paul Frehner is a respected professor at the University of Western Ontario and was truly supportive of this effort.  Despite all the experience and skill that we possess, if a genie jumped out of a bottle, one of my first requests would be for funding for more rehearsal time.
I was fighting a cold, and spent the evening in my hotel room, working on the concert program.  To save money, I am now doing all the graphics and advertising for my project which is a fairly steep learning curve. Trial and error, plus Canva and Create Booklet are all helping, but the night before the show, I set the program up on full-sized pages, uploaded to DropBox and went to bed. 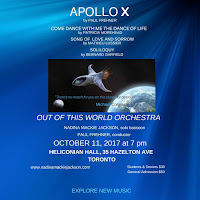 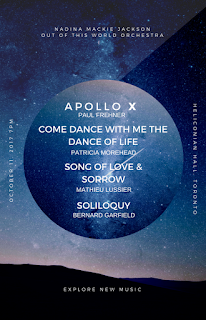 On the concert day, I packed all my gear and spent the morning printing the programs, then got lunch and went to the hall three hours early to set up the music stands (Joe Phillips helped me), move the percussion instruments into place (Paul Frehner and Joe Phillips helped), get makeup slathered on (because Rob DiVito was filming the concert and photographers Bo and Yan Huang were coming to capture a publicity photo) and into my new silver and black leather T-shirt, shiny black leather pants and my blue faux cowboy boots (it is a show, after all) because our soundcheck went

from 5:00 to 6:30 and the show started at 7:00.  We covered all the pieces in a 90-minute sound check.  My merch volunteers, Reshawn Walcott and James St Fleur, arrived straight from school while we were rehearsing and setting up the CD table; my ticket person Kristin Day arrived just before the show started… all of this part is very important and it helps so much to have people who know how to run the business end of the event.  This is an area where I could use much more help in the days leading up to the shows and is an aspect that needs to be rehearsed to run smoothly.
Right before the concert started, something went mysteriously wrong with my equipment (Apollo X is meant to be amplified)… after testing every component (batteries, microphones, amp and preamp), I decided to pretend it was fine but we suspected the preamp was shot. I remained hooked up to everything and maybe that gave me the confidence to be totally audible, at least, while playing the bassoon.  My speaking voice was reduced to a husky squeak by laryngitis so the audience had to really lean in to hear me.  Joe Phillips offered to lip-read and try to anticipate/guess my next comment. Bijan stood beside me, ready to take over, but I croaked on.