After last night’s show, I got to speak with hundreds of people and sign an almost equal number of CD’s.  This always happens when I play with orchestras, but this night was special for so many reasons.

And of course I loved every minute of it, talking with people who were musicians, people who had connections with my parents, people who were visiting the city as part of a conference, people who returning to music after not doing it since high school and talking to University computer-science students who have started their own acappella choir and instrumental club in a school that does not yet have a music programme.

Before the show I met many people at the pre-concert chat that I gave with Kevin Zakresky…  my Grade 6 teacher, Robert Zeigler (the one who allowed me to design my own curriculum in Grade 6… an ecstatic moment that I will never forget!) came to give me his new book, complete with a touching dedication (A Banquet of Crow)  and a beautiful young girl (Sofya) who gave me a persimmon!  One that you can eat without waiting until it is mushy.

And I met many old teachers and friends at intermission though many of them had to remind me of who they are… I realize now how single-mindedly I barreled down my life path, not really looking back until now.  And they all came to remind me … teachers smiling to remember what an incredibly shy little person I was, others telling me that they had emailed my school friends who now live in other cities to say that I had returned… this continued today as my wonderful hosts, Jim Caldwell and Sandra Kapral,  took me to the Studio Fair

After the show, I went to a party with the younger members of the orchestra and got a glimpse into the lives of incredibly talented people who are building a career in the north, including a young violinist from the orchestra who is also a concert pianist (Indra Egan) and a violist who is completing her doctoral degree in marine toxicity (Sonja Ostertag) and many others.

It was an incredible experience for me to play with this orchestra (a community orchestra with a pro core) because it was the first orchestra that I ever played with and this was the first time that they invited me to return, so I decided to release my new Vivaldi disc at this concert AND play the Hummel!
It was also my first opportunity ever to play the Hummel/Vivaldi from memory to a sold-out audience and it just reinforces the value of these orchestras that link people to their communities, in this case, giving me a chance to have a new experience and reconnect with the people who made it possible.  It was really quite mind-bending to be on the same stage where I had my first orchestral and solo experiences at the age of 16.
Anyway, I just wanted to mentionthe experience of playing the Hummel from memory for the first time.  Playing concerti from memory is really the only way to do it.  Yet it takes time and planning and many experiences to cultivate this repertoire.  The capacity to memorize is always present, but when we are young, the time is more available.  The sooner we start memorizing, the sooner this reflex becomes strong.  Each work that is memorized will make the next work easier to memorize.  I think that there are probably countless benefits from the process and it is astonishing that wind pedagogy has omitted this reality for so many years.  My advice to all students… develop the skill and experience now and it will always be with you.
Now I have the experience of reigniting my memory of the people who supported and nurtured both me and the orchestra… I now have the music and the people by heart.  And if there are a few gaps in my memory, they can always be mended by repeat visits!

Thanks to the mystery blogger who wrote such a generous review!!  And thanks to the people who took so many photos last night (please send me more!) and bought all the CDs!!

NMJ in new gown (designed by Christine Poddobiuk and created by Brenda Clark), Elizabeth Clark and our conductor Kevin Zakresky 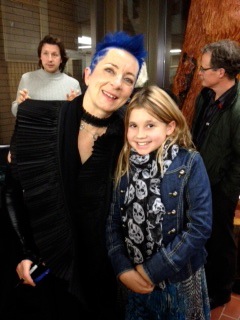 With Bella, the beautiful granddaughter of my high school band teacher, Garry Hartley (who started me on my path in music)

← A Night of Firsts Subversion Project →