Recording is a Mirror

Recording is a mirror
There are all kinds of reasons to record.  Often, it is to give myself the chance to hear something that I have always wanted to hear but couldn’t.  If the music was too hard, then recording it gave me a chance to edit it and hear it (really hear it, even if I still wanted to play it better and that was the last take).  This process helps me produce the live shows.  The last part is not something I do on purpose.  It just happens.
And I am not alone in this.  Still immersed in Keith Richard’s biography (Life).
He talks about laying down a dub track for “Satisfaction” while the Stones were on tour, and then, without his knowledge, their manager released it and it became a radio “Hit of the Week”.  He was mortified yet intrigued by the commercial process.  Despite the acclaim the band was not comfortable playing this tune until they heard cover recordings by both Otis Redding and  Aretha Franklin.  This recordings inspired (I guess that is the right word) the Stones to perform it themselves… here is what he said:
“A peculiarity of “Satisfaction” is that it’s a hell of a song to play on stage.  For years and years we never played it, or very rarely, until maybe the past ten or fifteen years.  Couldn’t get the sound right, it didn’t feel right, it just sounded weedy.  It took the band a long time to figure out how to play “Satisfaction” on stage.  What made us like it was when Otis Redding covered it.  With that and Aretha Franklin’s version, which Jerry Wexler produced, we heard what we’d tried to write in the first place.  We liked it and started playing it because the very best of soul music was singing our song.”
That is very cool.
Vivaldi update:
Thom Linken delivered his beautiful mod style chamber organ to the house for rehearsals tomorrow… everything ready… lists everywhere… parts corrected, musicians ready to travel, reed desk waiting. 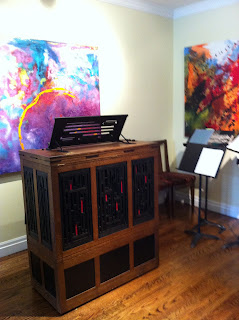 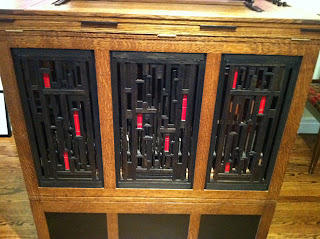