So much of touring is about planning, travelling and eating and sometimes sleeping… the music-making, masterclasses and time with wonderful people are the rewards!
We flew into Vancouver from beautiful Whitehorse and jumped into our rental car, a surprisingly zippy Volvo S40.  It was a struggle to load the trumpet cargo case, our suitcases, the CD suitcase, the corno, the bassoon and bags, but we found a way to puzzle it all into place.
Warm-feeling rain of the coast replaced the crystal-crisp air of the Yukon and we stripped off our parkas.

I told Guy that we were driving straight to the pie shop on Fourth Ave in Kitsilano that was closed when we drove by it on our 2009 tour.  We found it easily and discovered that it has evolved into a granola-style gourmet restaurant.  GF had the chicken breast with all kinds of organic seasonal vegetables and I had the best lamb-stew-with-rosemary-dumplings of my life.  There were vegetables that I had never tried before, including watermelon turnip and baby parsnips and alien baby cauliflowers along with things I knew such as red cabbage and zucchini… it was beautiful to look at.  We had a lovely salad with beets and carrots and roasted sunflower seeds and lentil soup with caramelized leeks and chocolate banana cream pie and many cappuccinos.  We also texted and emailed non-stop, recovering from our media-fast during the two-day trip to Whitehorse (no Rogers reception). 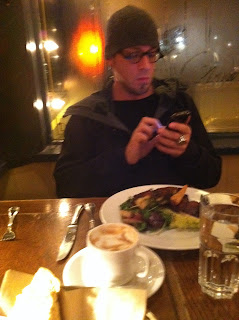 Then we headed into the night to find our hotel and managed to find it without resorting to maps, GPS or argument.  The Sylvia Hotel is one of downtown Vancouver’s oldest heritage buildings and it is beautifully sited on the edge of English Bay.  The vintage rooms and photos always make me happy.  There was a lovely old lady beagle checking into the hotel at the same time we were, along with a group of kids on a ski trip… it is always an interesting mix of people in the old-timey lobby. 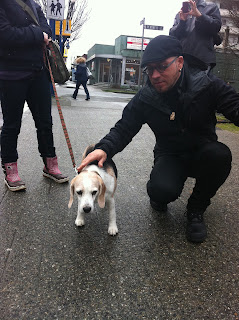 Our room was right next to the elevators, but as we were both achingly tired from the previous day’s concerts, we slept soundly despite the rumblings.  I wanted to make reeds but it just didn’t happen.

The morning was warm and misty – we sprinted out to buy supplies before a wonderful breakfast meeting with harpsichordist Michael Jarvis and Carolyn Jack (communications manager for the Vancouver Art Gallery).  We went to the Bulgarian cafe Acacia where I abandoned all restraint and had the ground beef, cabbage, and absolutely savoury-delicious banitza (fillo).  We had a quick visit and I was inspired by hearing about Michael’s restoration projects of nineteenth-century pianos. I hope we can do a recital sometime with my two 19th-century bassoons!  We said goodbye and loaded for the airport, returning the car and heading for the little prop plane that was taking us to Castlegar.
The flight was easy over astonishingly beautiful mountains feathered with deep show… I took lots of incomprehensible photos out of the scratched window despite the fact that we were sitting right under the right-hand prop support/wing.  Amazing to me that I can see the individual propellers in the photo but only a blur in real life. 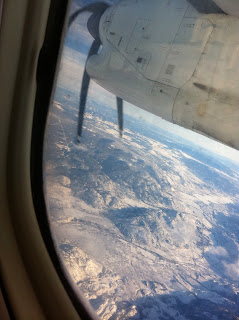 Guy pulled his hat down and slept hard for the time that we were in the air.
We rented a Ford Flex and by now, are used to all of the electronic conveniences, able to navigate the controls more quickly each time we jump into a new vehicle.  We found our hotel easily and went downtown to the first Chinese restaurant that beckoned (Double Happiness) and ate far too many delicious breaded meat dishes with thick shiny sauces.  Back to the hotel —- our room was directly next to the exercise room, so I promptly got on the elliptical machine for one hour, hoping to counteract the Canadian-style Chinese food.  Then scratched on a reed and went to bed.  Guy was already asleep — he was still exhausted from his flat-out performance of the children’s show in Whitehorse plus our evening concert
Our management has timed our travel days very well so that we recover from the concerts and have time to get to our next venue.  Good stories always come from difficult tours so we will just have to find our material elsewhere! 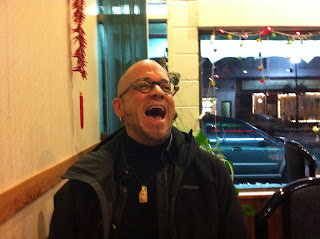 The next morning, we were up early and had a really expensive breakfast in our Sandman hotel then I headed into town to explore and leave Guy to the exercise machines.  We had a sound check at 1:00 in the really nice old Charles Bailey Theatre and met the meticulous piano tuner, Terry Helleran — he told us more about the theatre, that it had fallen into ruin several years ago and that a large chunk of plaster fell of the ceiling during a Jon Kimura Parker recital (landing beside the sweet little Steinway). 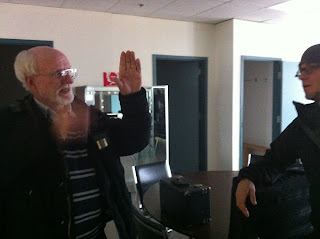 Terry let us use the piano for a quick sound check, then returned to continue his careful work.  Guy’s left hand was still aching from his floor-pounding antics in Buzz and Crow.

I was not happy with my reeds but there was still time to make one before the show. 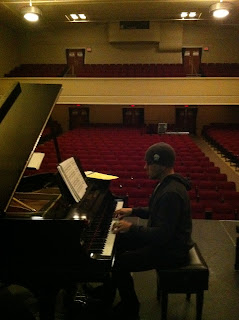 We packed up and went to visit the local artists’ collective Artisan then had lunch at the Caffe Americano before going back to the hotel.  There was time for me to trim a new reed for the evening concert and for Guy to have a nap… he has fine-tuned his ability to sleep under any conditions, including the scraping and testing of bassoon reeds; valuable skill in a roommate! 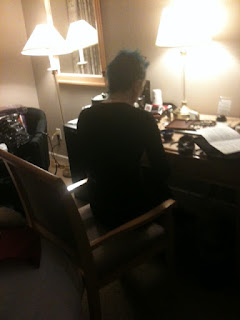 At 6:00, we were packing up, about to leave for the hall, when we got a call from the stage manager, Nadine.  She was worried because she had not heard if we had arrived and the airport was closed in Castlegar.  She was relieved to hear that we were on our way for the microphone check.  When we arrived at the hall, we were met by the lovely Nadine and the sound guys, Norman and Martin.  Nobody really knew who we were as there had not been any communication with the people we had been talking to earlier in the day for the rehearsals, but everything got sorted out and ran very smoothly.  We learned that Nadine Tremblay is a musical theatre director/performer/writer and we would love to see one of her shows someday!   We also chatted a lot with our very cheery security guard and I am sorry to not know her name.
The show was very warmly received and we had a chance to talk with people in the lobby of the Charles Bailey Theatre during intermission.  The weather was very snowy and we were amazed at how many people braved the elements to come to our concert.  Many people came to tell me that they had no idea that the bassoon could do so many things and people had many questions for Guy.
January 25, 2012 – travel to Saskatoon
The next morning, we drove back to Castlegar and I had homemade borscht and bread in the very homey airport cafe, Pie in the Sky and Guy made friends with a fancy little jet-setting dachshund named Smudge.  Our tiny airplane (Dash 800) had a really rough entry into Calgary.  Guy did not sleep during this part of the flight; he opened his sparkling green eyes and grinned.  He loves bouncy plane rides and was mildly amused by the people throwing up and squealing… I did not throw up but I was a bit clenchy. 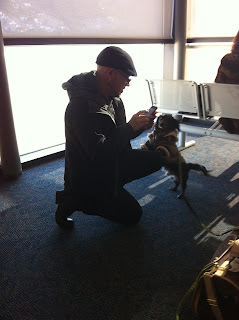 We switched planes in Calgary and flew peacefully into Saskatoon, which had a beautiful rosy sunset glow.  I have not been here before and loved seeing the broad bridges and the huge university grounds as Guy drove towards his parents home.

We had a fantastic dinner made by Helen and Allan Few… a feast for the eyes and a joy to the palette. 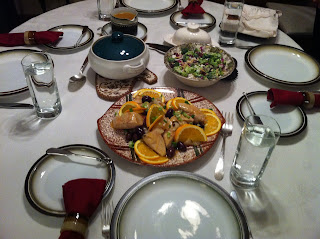 I made two blanks in the kitchen, surrounded by pastry and comforts of home.  Tomorrow, we have an interview with CTV, lunch with friends and rehearsals with the Amati Quartet.  We will have to go to the gym at some point!!! 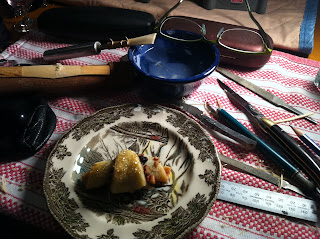 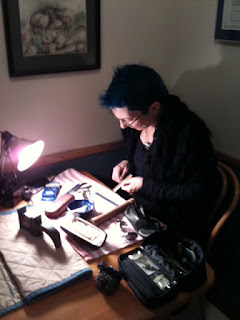