Up early for a fantastic breakfast then getting ready for the first Amati concert.
We arrived early and had time to set up on stage while the sound and camera guys were checking their positions.  Sheila was setting up the speaking mikes and soundboard and she loaned me her Swiss Army knife to shorten my reed.  We had time to get dressed… I always need GF to tighten my corset.  After the first two shows of the tour, he has learned to ask me if I can breathe since at the shows in Regina and Brooks, he had to loosen my stays on stage.

The shows always pass in a blur for me… the stories ignite and the music takes on new shapes… some things were better in the evening… a thrill to play two shows on the same day.  It was our first time out with two new arrangements of Flight of the Bumblebee (trumpet & bassoon) and Oblivion (corno & bassoon)… we also did the Shostakovitch Dances in their original arrangement (trumpet & bassoon with strings) which was weird for Guy since he is more used to playing trumpet and piano at the same time. The cameras rehearsed during the afternoon and then rolled in the evening.  Both concerts were full of enthusiastic people, including many young people…great to see young people, maybe because they remind me of my son or my own early pure-hearted self.

One of the high school students is a bari sax player named Daniel (he signs his name “Big D” which is lovely) and he has converted to the bassoon after the concert!  His band teacher is torn between delight and panic but I am flat-out thrilled.  And I love to see older people… I am always so grateful that people give us their time.  Marla and Geoff (first violin and viola) brought their children (Miles and Carmen) to help with handing out programs.  Miles showed Guy a new game for his iPhone (Cut the Rope) and the dressing room was filled with Guy’s play-by-play sounds as he valiantly tried to master the game in the 10 minutes before showtime.

We had two trumpeters volunteer to sell CDs for us… Adam came to the first show and Mitch arrived in a splendid suit for the evening event.  Here are Adam and Guy… I wish I had a photo of Mitch! 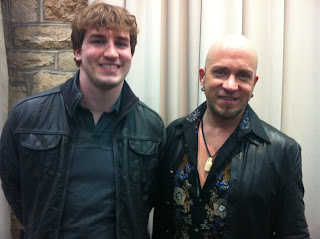 Home late after the last show, we put on our pyjamas and ate leftovers on beautiful china in the cozy kitchen…  Helen and Guy planned the large breakfast that was being presented tomorrow morning to Lynne and Doug Bailey who were going to drive us to Brandon.  We were in bed by 2 a.m.
← Tour - Day 14 Tour - Day 16 & 17 →